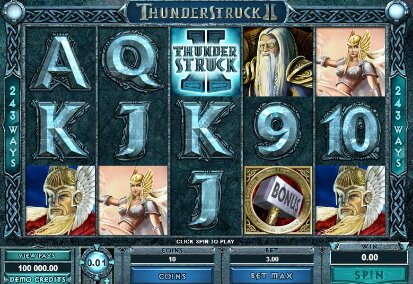 Despite the steady stream (or more like a torrent at times) of new slots at online casinos, some games have an enduring quality that keeps them top of players’ charts long after they debut. One such game is Microgaming’s Thunderstruck II. Originally released in 2010, this sequel slot with its Norse mythology theme proved even more successful than its noble ancestor and still has a formidable following. Built around Microgaming’s 243 Ways to Win mechanism and with its Great Hall of Spins bonus rewarding long-term loyalty it clearly has qualities that command respect and electrify players like a lightning strike itself.

Put Thunderstruck II through its paces in its demo mode and we doubt you’ll pass on switching to play it for real money. It is a class act.

243 Ways to Win – The essence of Thunderstruck II is a basegame of five reels, with 243 Ways to Win across them. If you’re new to Microgaming’s 243 Ways to Win slots we have a fuller article explaining them elsewhere on this site, but for now just consider them as an extravagant number of paylines increasing the chances a spin will generate a win.

Placing your bet – With Thunderstruck II all 243 Ways to Win are permanently engaged, so there’s no options to dial in fewer ‘paylines’ and players simply need to select the coin value and number of coins they wish to bet ahead of any spin. The minimum stake possible is a very wallet-friendly $0.30 with fifty other options up to a maximum stake of $15.00 per spin. Once you are happy with your bet level, hitting ‘spin’ puts your destiny in the lap of the Norse gods who ride the Thunderstruck II reels!

Thunderstruck II slot’s appeal clearly hinges on its special brew of bonus features which bring some classic video slot favourites into play with a little twist that keeps players coming back to its reels.

Wild Symbol: The Thunderstruck II symbol takes the role of a classic Wild on these reels, with the power to substitute for all but the Bonus symbol and to double any wins it contributes to.

Wildstorm Feature: This is a popular Random Wild feature of this slot, which can strike at any time turning an entire reel wild. Better yet, lightning can strike twice or more with Thunderstruck II giving the extraordinary potential that a spin may suddenly be transformed to show five entirely Wild reels with an exceptionally big win raining down as a result.

Bonus Scatter Symbol: This symbol has not only the power to payout when simply in view two or more times, but three or more is the key to entering Thunderstruck II’s most hallowed bonus feature, The Great Hall of Spins.

The Great Hall of Spins: Despite its grand title, this is actually a four-tiered set of free spin bonus games, each dedicated to one of the four Norse gods, Valkyrie, Loki, Odin and Thor and each with its own special powers to gift big wins:

The Great Hall of Spins is very much the “jewel in the crown” of this slot, with a memory feature logging how many times it’s triggered to unlock each tier. What’s especially nice about this is that your personal progress is retained at the end of each session, so you can gradually experience all the free spin games over time.

Another part of Thunderstruck II’s appeal has to be the quality of its presentation. The graphics and sound are very nicely related to the Norse theme, adding a heroic feel to play that makes each spin feel like a dramatic quest rather than simply rotating reels on a casino machine. We particularly liked the filmic soundtrack this slot uses too, which has just the right amount of melodic and dramatic elements to enhance play without becoming irritating over long sessions, which is quite a feat we can assure you!

The Thunderstruck II Wild is the highest paying symbol on these reels, with five showing on consecutive reels triggering a payout of 1000 times the linebet. If this seems a little lame compared to some rival slots, hold your horses … don’t forget the Wildstorm Feature we mentioned earlier. If that strikes all five reels, then all five reels are wild so that triggers 243 times 1000 times the linebet! Now, that sounds significantly more enticing eh?

Put Thunderstruck II through its paces in its demo mode and we doubt you’ll pass on switching to play it for real money. It is a class act that is very easy to learn and quickly grabs your attention with its superb production values and bonus features. What adds considerably to its appeal is the memory feature of its Great Hall of Spins Bonus – returning to play Thunderstruck II over several sessions allows you to gradually explore all its bonus games at your leisure, and there is a real sense of achievement as you unlock a new ‘Hall’ to see what heavenly wins it might summon from these Norse gods.