When it comes to the slots that are literally the most highly prized attractions at the best online casinos, progressive jackpots are the go-to games. For any Canadian player looking to try their luck at landing a million or more bucks from a single online bet, progressive slots will be high on your list of priorities. All our recommended casinos indulge their members with these extraordinary “big win” beasts too, so if you’re inspired to ‘go large’ with your next slots session they’ve got you covered.

What are Progressive Slots?

Progressive slots are part of the broader group of progressive games that are offered at the best land-based and online casinos. The progressive element of all these games refers to a specific prize that has no fixed value and is grown in proportion to how many bets are wagered through the game before it is finally won. With progressive slot machines, this means the headline jackpot changes over time, escalating each time a player plays a game without landing that prize.

History – The origin of progressive slot machines goes back to the 1980’s when early computer technology made it possible to connect slot machines in ‘local networks’. This meant clusters of slots could feed a single progressive slots jackpot prize pool that any of the connected machines could win. Roll forward a few decades and the Internet has talented slot game developers a simply enormous network to connect games, and hence online progressive jackpot slots can be fed from a community of players unimaginable until this Century. The upshot of this is that new online progressive slots can grow their base jackpots at an extraordinary rate, and multi-million dollar wins from a single spin are not uncommon. To whet your appetite for how life-changing a progressive jackpot slot game can be, Microgaming’s Mega Moolah slot paid out a record-breaking €17,879,645 to a Betway Casino player in October 2015. That’s nearly CAD 26 million!

After the jackpot is won – What happens immediately after a progressive game pays out? Well, aside from making the last player happier than a pig in poop, the jackpot resets to a base level and starts growing again. The base level is always a ‘big win’ and it certainly doesn’t go to zero, so you can rest assured you won’t be upset if crazy luck sees you trigger the win shortly after someone else has.

For a quick hit of some of the very best online progressive jackpot slots, here’s a sample of some of our favourites. We couldn’t miss out Mega Moolah (which we mentioned above for its record-breaking payout), but big bounties are also the specialties of The Dark Knight, Iron Man 2 and Mermaids Millions.

How to Play Progressive Jackpot Slots

What’s the fuss about – apart from the obvious draw of the headline jackpots they can generate – the truth is that they’re no more difficult to play than any other slot machine. Progressive jackpot slots are played in exactly the same way as static jackpot games, and your chances of winning the headline prize are the same as any other player on the network playing that game. There is a slight qualification to that last sentence that players should be aware of, which we’ll explain below.

Placing a bet – In order to qualify for the progressive prize, all paylines may need to be played to ensure the winning combination that lands the progressive can be achieved, or a Max Bet staked. Alternatively, with games such as Playtech’s Iron Man 2, which have the Random Marvel Mystery Progressive Jackpot that can trigger on any spin regardless of the result, larger stakes will increase the probability of the progressive bonus game triggering.

It’s not all or nothing – One final thing to remember is that a progressive jackpot slots’ headline prize is not the only win it can spin. These games all have pay-tables with multiple ways to win and bonus features comparable with other online slots, so the gaming experience is just as exciting whether you land the ‘big one’ or not. The progressive jackpot is just the cherry on the top of a very moreish gaming treat, but what a cherry! A cherry the size of a bowling ball… or medium-sized planet!

The best progressive jackpot slot games clearly attract players like bees to a honey pot, and in doing so have the happy byproduct of building their jackpots even faster. Also the wide choice of online progressive slots means there are games to suit all sorts of players’ budgets, so don’t feel these games are not for you if you need to keep a tight reign on your bankroll. If you fancy finding out more, check out our reviews for the top games we’ve listed above, and if you’re just chomping at the bit to get going now, all our recommended casinos have very plump progressive slots to make you drool.

Mega Moolah Pays Yet Another Massive Jackpot: The progressive slot designed by Microgaming is one

of the most requested slot game on any internet casino because it regularly pays out jackpots worth well over $1 million.

On September 25, 2017, it happened again. A player on Unibet was spinning away on the slot on a Monday like any other but then suddenly hit the mega jackpot! The amount of money in the jackpot at the time was C$11,684,806.68!

The winner of the massive, life-changing sum has yet to come forward for an interview, but Microgaming has confirmed the win, also noting that it is the second-largest progressive jackpot win this year. The largest was more than C$12 million to a player spinning Mega Moolah slots on their mobile device on April 25, 2017 (Is there something about the 25th of the month that we don’t know about?).

The latest payout of C$11.6 million will be made as a lump sum to the winning player.

When NetEnt released the Divine Fortune video slot to online casinos in January 2017: It was immediately a 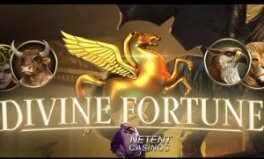 hit. Set in the world of ancient Greece, players are drawn into the world of mythical creatures and encouraged to play for any of the jackpots that await the lucky winners.

At the end of September, the jackpot hit: Thirty-year-old Patrick from Austria was playing on the FreakyVegas online casino when he hit the top prize. Suddenly, the screen erupted in graphics that showed he had just won €475,000 (roughly 715,000 CAD).

“Unbelievable!” he said. “I wanted it so bad, couldn’t believe it when it really happened. That would even be enough for a big house!” Patrick then decided to discuss his options with the FreakyVegas support team to consider buying that house or investing the money.

Players have cashed out for significant sums of cash since Divine Fortune appeared in the online slot world this year, but this was the largest jackpot to date.

The slot, made up of three progressive jackpot levels, is quite a frequent payer, on average being won every seven days.

With 5 reels and 20 fixed paylines, it looks like any other slot. However, it holds a big, three-layered progressive jackpot within it. The Minor, Major, and Mega jackpots are awarded on random spins, but all of them typically – and regularly – reach amounts worth trying to spin and win for, with an average win being an eye-watering €72,373 (around C$110,000).

And, yesterday’s win wasn’t even the biggest of all time: that would be the Mega Jackpot win, won on 13th April 2016 for an absolutely staggering €310,377 (close to half a million CAD!).

With so much going for it, and such frequent payouts, try your hand at the Major Fortune progressive jackpot