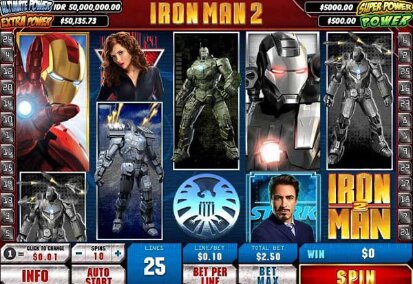 Playtech have won quite a reputation with slot players for its series of Marvel slots, bringing the superheroes of that famous US comic publisher and its spin-off movies to life as multi-payline video slots. Amongst the Marvel slots that have been particularly popular with players has been Iron Man 2. Based on the 2010 film of the same name, this slot has been the Iron Man slot of three released that routinely shows up in the most popular slots at the best online casinos, so it clearly got the recipe right. And what is that recipe? Our review should help make that clear.

Whether you find Playtech’s Iron Man 2 in its twenty-five or fifty payline specification, this Marvel slot is, like Tony Stark’s own efforts, a very fine piece of kit.

Originally released as a twenty-five payline game, Iron Man 2 has had a subtle makeover and can now boast fifty paylines across its five reels. Unlike some video slots Iron Man 2 doesn’t offer any choice as to how many of those paylines are active per spin (the fifty are always active), so to set your preferred stake you simply need to choose a ‘coin’ value and how many coins to bet per line. That still leaves plenty of flexibility to cater for different budgets, with the minimum and maximum bet per spin being $0.50 and an eye-watering $500 respectively.

You can enjoy spinning these reels in basic manual mode, clicking each time to play a game, or use its Auto Start button to dial in up to 99 spins then sit back and watch the action unfold.

Like all the best video slots, Iron Man 2 adds a number of features to its reels to spice up the basegame and unlock a casino bonus free spins game. In more detail, these are:

Stacked Symbols: Six of the lower paying symbols are stacked to cover two reel positions to generate more regular wins, and each position is considered independently of the other.

Wild Symbol: This is Iron Man’s S.H.I.E.L.D logo, and in traditional Wild style substitutes for all other symbols except the Scatter. It also acts as the highest paying symbol on the paytable in its own right.

Scatter Symbol: The Iron Man 2 logo takes on the role of Scatter on this slot, with more than two in view triggering a pay, and three or more in view also triggering its free spins bonus feature.

Free Spins Bonus Feature: Ten free spins are the starting point of this feature, with a couple of extra boosts to note. First, all wins have a multiplier applied, starting at 2x and increasing one step every two spins to finish on a 5x multiplier. Second, an Extra Wild appears on the middle reel for all free spins, adding to the chances of wins being built. Sadly, more free games cannot be retriggered during this bonus, but the booster features mentioned do compensate to make this a great opportunity to earn some big wins.

Playtech has done a good job of bringing an appropriately techno feel to the Iron Man 2 slot, with brushed metal buttons and electro-mechanical sound effects to enhance the machine-like feel. It’s a slight shame that actual clips from the Iron Man film haven’t been used in the same way that Microgaming did with the Cinematic Reels of its The Dark Knight slot, however the overall look and feel is still pretty classy.

We should also note that players who like quick spins might find Iron Man 2’s leisurely reel animations (a little over seven seconds by our watch to complete each spin) a bit frustrating, particularly as the ‘Fast Play’ button we found in the options menu didn’t seem to have much effect.

Big wins – Iron Man 2’s paytable shows that five instances of the Wild hits the highs with a win of 3000 times the linebet your reward. That’s fantastic in the basegame, but don’t forget the multiplier in play in the free spins bonus feature; doing the maths, should luck land you that combination in the last two spins of the ten awarded, that becomes 15,000 times the linebet. Powerful stuff, yet that’s not the most heroic jackpot Iron Man 2 can deliver…

Progressive jackpot – As one of the family of Playtech’s Marvel slots, Iron Man 2 players are primed for the Marvel Multi-Level Mystery Progressive Jackpot. That’s quite a mouthful to say, but the underlying feature is a simple, randomly triggered progressive jackpot game in which one of four tiers of progressive prize is the guaranteed outcome. Players get to play a 4×5 scratchcard-style game, where the moment three matching prize symbols are revealed the related progressive is paid. With every Playtech Marvel slot feeding this progressive game, we can assure you that every tier is a very tasty reward. To really hit the stratospheric highs like Iron Man on full reheat, you’ll be hoping to nail the Ultimate Power prize. That starts at $100,000 and can often get to the magic million mark before paying out.

Whether you find Playtech’s Iron Man 2 in its twenty-five or fifty payline specification, this Marvel slot is, like Tony Stark’s own efforts, a very fine piece of kit. It plays very well, with lots of neat features to keep up the drama and activate unexpected results. Factor in the random progressive jackpot this game’s linked into, and Iron Man 2 is well suited to slots’ fans that love action-packed games with heroic wins to fight for.