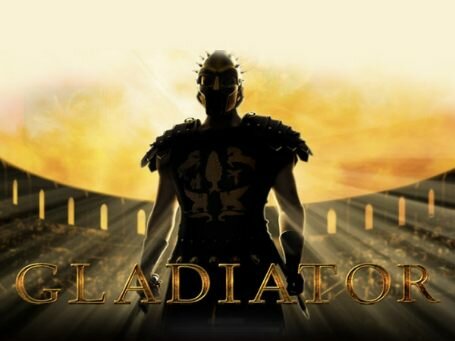 Hit films and TV shows have been a rich source of themes for online slots over the years, and Playtech has been particularly adept at turning movie reels to successful gaming reels. Gladiator is probably one of the most successful. Based on the Oscar-winning movie released in 2000, Gladiator slot has been around so long it could almost be regarded as ancient history itself. However, this online slot soldiers on, and still commands a massive army of fans since its qualities are legion as we shall reveal.

There may be more cutting edge online slots available today, but Gladiator slot, like the heroic character of Maximus Decimus Meridius, is a stalwart that commands maximum respect.

Placing bets – The core battleground of Gladiator slot is its basegame of five reels and twenty-five paylines. As with all the best online slots, betting options are extremely flexible with choices to set the basic ‘coin’ value, how many of the paylines are active and how many coins are staked per payline. By juggling the options, you can go into battle with Gladiator slot for as little as $0.01 or as much as $250 per spin.

Spinning the reels – With your preferred stake dialled in, it’s a simple case of hitting the Spin button to see what fate the reels have in store for you. Alternatively, an Auto Start option lets you choose to set a sequence of up to 99 spins in motion if you find repeatedly clicking the spin button a bit of a chore and don’t have servants like the Emperor to do the work for you.

Gladiator slot has two special symbols to watch for, both of which unlock this game’s extremely popular bonus games:

Wild Symbol: Represented by the iconic Gladiator helmet, this symbol appears only on the three middle reels. It has no paytable value itself, but is the key to other wins in two ways. First it can substitute for all other symbols except the Scatter to build winning combinations on active paylines. Secondly, if three are in view the Gladiator bonus game (described below) is triggered.

Scatter Symbol: The Coliseum Scatter not only pays out if two or more instances are in view, but will also trigger the Coliseum Bonus feature if three or more are seen.

The finer details of the two bonus games mentioned above are:

Coliseum Bonus: At its heart, this is a free spins bonus, but an interim game gives players the chance to pick from hidden prizes to assemble the cohort of bonus features they will ultimately proceed with. The number or free spins is decided here, together with what, if any, multipliers, extra Scatters and extra Wilds will enhance your free games in the Coliseum. This is a mighty feature, and earning the full complement of possible options can turn these free games into a colossal opportunity to liberate massive wins from this online slot.

Gladiator Bonus: This is a scratchcard-style bonus game where uncovering a panel of nine hidden helmets with bronze, silver and gold values accrues a final, substantial cash prize.

One final feature of Gladiator slot to mention is a simple Black / Red gamble option that can be played on any win. This is a “double or nothing” bet on the outcome of a single playing card dealt from a deck, and can be used to double up a win to a maximum of $1250.

Although Playtech’s Gladiator slot has been around for a few years now, it has been refreshed to keep it up to date. That said, it’s not the most cutting edge presentation of a movie-themed slot when compared to Playtech’s own Aliens slot and Microgaming’s The Dark Knight. We also feel the sound design is a bit odd, with the classic, bleepy casino slot effects triggered on wins feeling out of place against the brooding cinematic score that underpins play.

Despite the criticism voiced above, Gladiator slot’s presentation doesn’t really detract from the core thrills this game delivers, especially when you consider the massive number of players who still pick this game as their preferred weapon of choice.

The standard Gladiator slot has a non-progressive jackpot, but it’s still a very tempting prospect since it pays 5000x your linebet. You should also remember that, if luck delivers you into the Coliseum Bonus game, all wins in the free spins will be subject to a multiplier so spinning the jackpot combination of five Emperor Symbols (an image of Joaquin Phoenix in the role) in this feature could see that jackpot doubled, tripled or even multiplied beyond that!

Gladiator is a venerable video slot that, despite its relative age (it debuted in 2008), still maintains a huge following amongst players. It’s often to be found amongst the lists of player favorites / most popular slot at the best online casinos, and a trial session on its five reels soon affirms that its reputation is well deserved. There may be more cutting edge online slots available today, but Gladiator slot, like the heroic character of Maximus Decimus Meridius, is a stalwart who commands maximum respect.