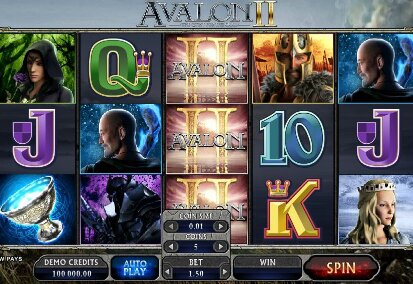 Sequels are relatively common amongst Microgaming’s online slots, and so the success of its Arthurian legend-themed Avalon slot spawned Avalon II in early 2014. As befits the epic legend of King Arthur and his quest for the Holy Grail, this is a truly epic slot that has drawn players to its five reels with the challenge of experiencing its eight bonus feature games. Avalon II offers quite a gaming journey so we begin our own quest to reveal its secrets with the basics . . .

A must for all valiant Knights of the Online Slot Paytable!

Place your bet – Avalon II’s divine power is borne by five reels and 243 Ways to Win across them. Effectively that amounts to 243 paylines, and these are fixed in play for each spin, leaving players simply with the task of building their preferred bet from adjusting ‘Coin Size’ and ‘Coins’ displays to taste. Juggling these two values gives a total of fifteen stake options ranging from $0.30 to $7.50 per spin, so there’s plenty of range to suit different depths of pocket.

Hit the reels – Once you’re happy with the total bet you’d like to play, hitting ‘Spin’ or dialling an automatic sequence of spins with the Auto Play feature will begin your quest for big wins on Avalon II.

Before we dip into the star attraction of Avalon II’s features, there are a number of magical symbols to watch for in its basegame:

Wild Symbol: The Avalon II symbol plays as a traditional Wild, capable of substituting for all other symbols bar the Scatter and Expanding Wild symbols.

Lady of the Lake Expanding Wild: Heralded by the ghostly appearance of the Lady of the Lake symbol on reel three, she expands to completely fill the reel to summon additional wins.

Merlin Random Wild: Merlin’s magical touch when he randomly appears from thin air is to award an instant cash prize if he arrives when a spin shows no wins, or multiply any wins he does gatecrash.

Grail Bonus Scatter: This Scatter not only pays out when two or more are in view, but also triggers Avalon II’s highly prized bonus crusade when three or more are the result. Which brings us neatly to discussing this highlight of the Avalon II slot…

Mentioned earlier, there are eight special bonus games to quest for with Avalon II, each being a level you achieve by triggering the Grail Bonus feature a certain number of times. In brief, the eight games are:

Lake of Legend: A dice game where the aim is to rebuild Excalibur from six pieces within ten rolls. Each roll awards a multiplier of your triggering stake, with a further bonus for completing the task itself.

Misty Value: A free spins bonus of fifteen games with an extra Wild symbol in play that will double any wins it builds.

Choose Your Path: An option to pick either a Whispering Woods or Forest Falls bonus. The former is a player pick from five shields to earn an instant win, and the latter an award of twenty free spins with Trailing Wilds that leave a trail of extra Wilds behind them as they slide down a reel.

Dusky Moors: This is a scratchcard style feature where a Match 3 of multiplier values revealed by player picks applies that multiplier to the triggering stake.

Morgan’s Keep: More free spins! Twenty this time, with Rolling Reels in play that can award multiple consecutive wins, each escalating the multiplier applied to it up to a maximum of 6x.

Hall of Shadows: From player picks a fight sequence is launched against the Black Knight, with each strike accumulating multiplier values. There are five battles to wage in total so plenty of scope to not only knock the stuffing out of the Black Knight but also rack up an amazing reward for your bravery!

Isle of Avalon: Not so much an island more a wheel-of-fortune, this feature gifts lucky players a spin of up to four multiplier-laden wheels to assemble a king’s ransom of a reward.

Whilst the above list may suggest Avalon II is a complex game to understand, it is actually no more difficult than any classic video slot. Avalon II shouldn’t daunt new players – it really is easy to play; with the only dilemma you face being how much you’d like to bet on the next spin.

Avalon II should definitely appeal to fans of fantasy and ‘sword and sorcery’ themed slots. The look and feel translates the theme well, with sound and effects adding suitable touches of mystery and epic drama to events as they unfold. There’s a filmic quality to the production too, so playing to explore all Avalon II’s features does feel like an ‘epic journey’ (and you should imagine that phrase being delivered in a rich, gravelly, cinematic tone) that demands true dedication to King Arthur’s cause.

The maximum payout Avalon II teases is effectively 16,000x your stake, and is achieved through stacking multipliers in its bonus feature games. Should you enter the Grail Bonus features with a maximum bet of $7.50 on the the triggering spin that means a hefty $120,000, but even a minimum stake would bring home $4,800 which is quite a return from a single spin.

Avalon II is a deservedly popular Microgaming online slot, which rewards long-term play with an unfolding narrative of bonus features mining the themes from Arthurian legend. Basegame pays aren’t exceptional, but it is the rich bonus features that add such depth that the Lady of the Lake would need a submarine to find the bottom. A must for all valiant Knights of the Online Slot Paytable!